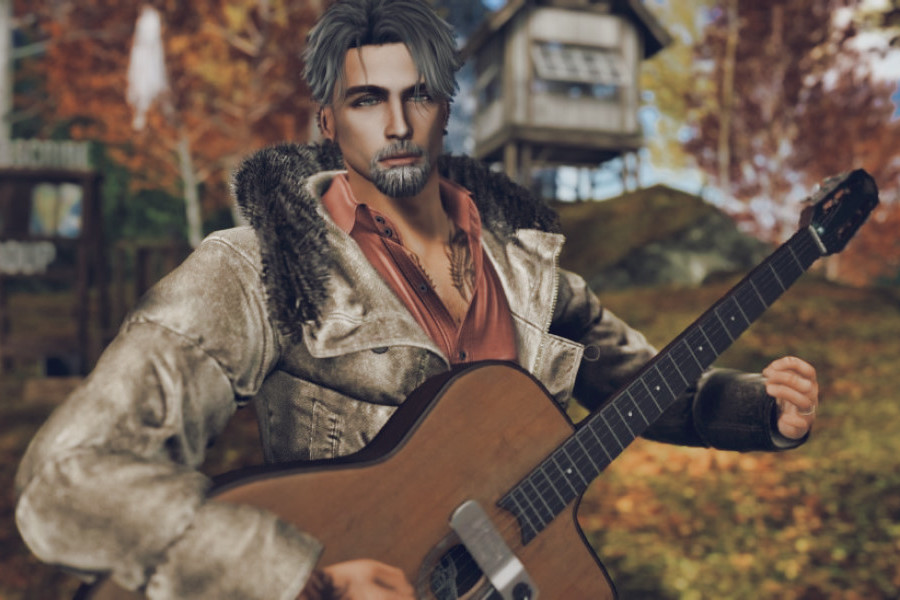 Humpday again! This time I decided to celebrate with my friend Jack Slade as he was giving a house concert at his place ‘LouJacks’. Always fun to be at one of those.

Writing about Jack is easy and I have to admit, when it comes to him, I’m totally biased. I’ve heard him sing so many times now and he’s for sure my favorite artist here in Second Life. With his acoustic guitar and a voice even a flu can’t ruin, he played a mix of covers and originals starting with Uncle Lucious’ “Keep the wolves away”, a song he learned recently. Very likeable and talkative he led through his show with lots of short anekdotes and stories, as his house concerts are something special and he has the time to do it. It always has something of listening to an old friend, very intimate.

Jack lives in Minnesota and has already played shows all over the States and started singing here in Second Life about 6 years ago. He describes himself as a songwriter, plain and simple – and that’s exactly what he is. No fancy stuff, no catchy cover tunes: just a man playing acoustic guitar. Listening to his originals, he lets you participate in his life with ups and downs and often tells you the story behind it. And he has a lot to tell, as he has written over 300 songs in his life so far. But he doesn’t just play originals, he also sings selected covers at his shows, which go wonderfully with his own songs. You love singer-/songwriter and acoustic guitar? Then Jack Slade is definitely a must.

LouJacks isn’t an official venue, it’s Jack’s place and only open to public when giving one of his house concerts. And if so, I can only recommend to come by as it is always like a garden party with good friends. Intimate, entertaining and cosy.

Thank you Jack for a wonderful and intimate hour!