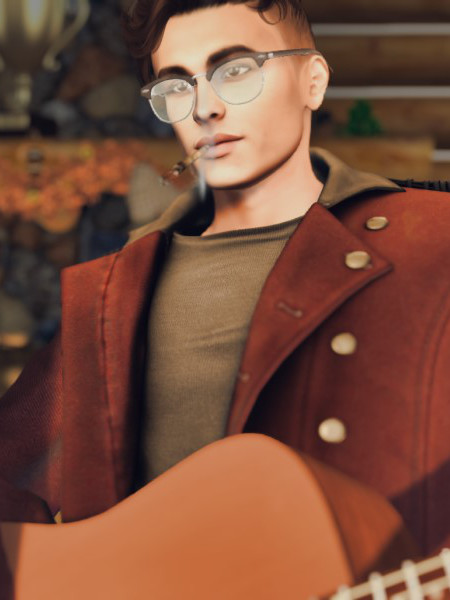 Being invited is always something nice, especially when it means to discover something new. I was asked to come over to Saddles to see returner Ed in SL – how could I say no when I neither knew Ed nor had visited Saddles before?

Ed opened his show with his original “Spanish beauty”, a soulful start that immediately gave us a glimpse of what to expect in the next hour: a sentimental but relatively light and loose voice combined with good guitar playing. His set was a good mix of originals and covers including Radiohead, Chris Stapleton and Bill Withers, but for me his own songs stood out – especially “Flow”, which is about a long-distance relationship. I also was impressed by “Mismatched”, which he sang for the first time as kind of improvisation. Ed came across as a likeable and dedicated musician and I’m definitely looking forward to hearing more of him.

Writing his first song at the early age of 8…

Ed in SL is a singer/songwriter from England who just found his way back to Second Life after a longer break. Writing his first song at the early age of 8, you surely can call him an early starter. A little later from the age of 14 his interest in music became more serious, which lead him to study vocals and modern music at college, whilst also performing regularly in real life. Ed’s musical influences are artists like Paolo Nutini, Cat Stevens, Ed Sheeran, Chris Stapleton and bands like Radiohead, Coldplay and R.E.M.

Established in 2013, Saddles Live Music Venue & Retreat is a photogenic venue with a lot of things to discover. In the country themed sim you can find stables for horse riding – yes, even rezzing your very own steed is possible – a small beach, a romantic wedding chapel, a shopping mall, an art gallery and of course live music. The shows take place at 7 days a week from 7am – 1pm.

Thank you Ed for a wonderful hour!

“Not just a man and his guitar.”
Jack Slade
@ LouJacks (house concert)