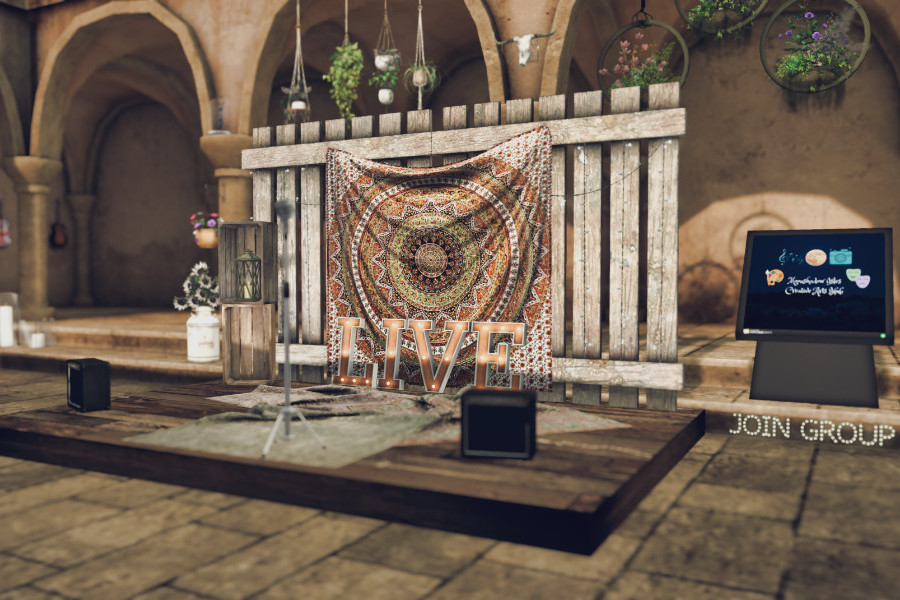 Opening a new venue is always hard and, as my friend Ed told me about his plans, there was no need to think twice about doing a feature. The reason why I feel comfortable with this is the purpose: M.I.C.A.H. is not only a place to give artists a stage – it is also an attempt to provide encouragement, support, advice and a platform for creative people to share their work in Second Life. Thats what a community is about – good luck, Ed!

Planned as a hub of knowledge and shared experiences for musicians, photographers, artists, poets and comedians, M.I.C.A.H. is more a project than just a single venue.

Born out of the idea of a venue that showcases new performers and also where venue owners could come and see performers without the need for auditions that take time out of their venue schedules, it developed into a hub. A hub that offers streams and workshops, among other things, to help new performers and artists as well as established ones.

Open to collaborations, the plans for the near future are to grow organically and partner with other like minded creative individuals, as well as hosting a number of different events.

M.I.C.A.H. – the acronym for “Moonshadow Isle Creative Arts & Hub” – is a new venue dedicated to the art of Second Life created by the ‘in SL’ family Ed, Sue and Phil. Named after the song “Moonshadow” by Cat Stevens which speaks of finding hope in any situation and to be present and joyful.

The build itself is a lovely estate in an eclectic fusion of bohemian and Mediterranean. It consists of a main building – which includes the stage, the gallery, a hangout area with card games and air hockey as well as a restaurant – and a surrounding garden area with lots of photo opportunities.

Exploring is one of the most fun things to do in Second Life and inspired by the amazing games of Madpea, M.I.C.A.H. wanted to create their own experience to provide a way for visitors to explore the sim whilst giving a little adventure. We all love a good medieval fantasy and so a story brings us into the depths of a mystical cave beneath the venue. I don’t want to spoil the surprise, but rumors say you can find a hint on the lower floor to start the hunt. But be careful, along the way you will find not only lots of little areas designed for relaxation and romance but maybe also a little danger.

On the upper floor you can find the Dreamscape Gallery curated by Jayda Purz, a passionate RL and SL photographer. Open to other artists, the gallery currently only shows Jayda’s work, which can be described as documentary: she works without poses and tries to capture people in the moment, bringing their emotions and feelings into the picture. With that as her specialty, she has recently expanded her comfort zone by working on some landscapes that are also shown. For more information about the gallery, Jayda encourages artists to contact her.

“I want to provide opportunities and encouragement to new and existing SL performers.”
Ed in SL

Ed in SL is a singer/songwriter from England who just found his way back to Second Life after a longer break. Writing his first song at the early age of 8, you surely can call him an early starter. A little later from the age of 14 his interest in music became more serious, which lead him to study vocals and modern music at college, whilst also performing regularly in real life. Ed’s musical influences are artists like Paolo Nutini, Cat Stevens, Ed Sheeran, Chris Stapleton and bands like Radiohead, Coldplay and R.E.M.

“When Ed asked me to play, I felt honored to be a part of such an awesome project and immediately accepted.”
Lexus Melodie

Lexus Melodie is a british singer-songwriter with a charming personality. She has performed her originals live in and around London and is no stranger to the SL music scene, returning after a break. In addition to her own songs her songlist covers quite a range of songs i.e. from Kate Nash, Dire Straits, Oasis, James Blunt and many more.

“I was honored when he asked me to sing at the venue opening, that is the only word.”
Jack Dryden

From Retford, England, Jack Dryden is fairly new in performing live in Second Life. Self-taught and without any musical training he sings a mixture of country, pop and oldies including Waylon Jennings, Buffalo Springfield, Kodaline and The Lumineers. Jack also writes his own songs, but does not perform them yet. Speaking of performances, he attended some open mics in RL – however he is now focusing on Second Life.