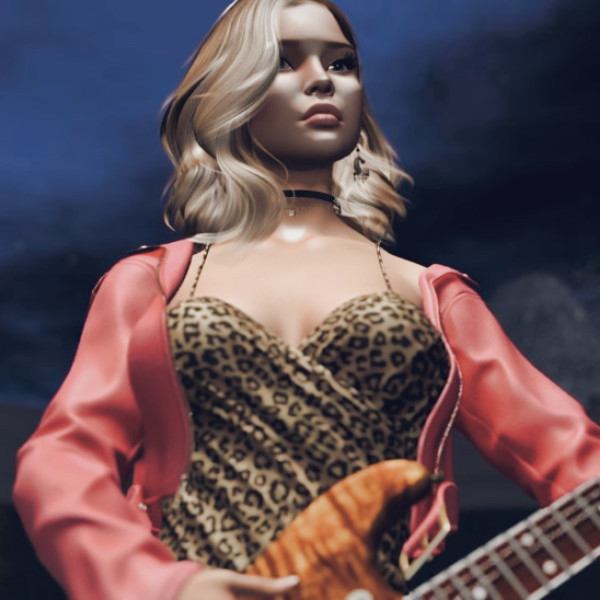 Recently a friend of mine told me about Mystelle and I tried to catch one of her shows – yesterday I made it. I was at End of Time to see her and hell yes, it was a blast!

Being another instrumentalist in Second Life, Mystelle plays electric guitar and I promise she will captivate you. I definitely was. Beginning with a slow and relaxing jam-track followed by a real instrumental classic – The Shadows’ “Apache” – she opened her show and made me wanting more right from the start. Skill- and playfully she performed songs amongst others from Van Morrison, Coldplay, Gary Moore and Frank Sinatra, giving an impression of her wide musical range. If you love elctric guitars and instrumentals she is definitely a must see. Perfect guitar play, perfect sound. She left me mesmerized.

…learn from everyone but not copy or imitate them

Mystelle grew up in a family surrounded by music and picked up the guitar at age 10. Influenced initially by Chet Atkins, Larry Carlton, Joe Pass, Jeff Beck, Bonnie Raitt, the Ventures, and others she loves many kinds of music and decided early on that she would learn from everyone but not copy or imitate them – as no one could play another’s style as well as the original. She has done numerous recording sessions, instructed guitar and pedal steel and played concerts with world-famous stars and played for a USA Vice President. But she left the full-time music scene to enjoy a quieter life at home with her family, recording in her home studio and performing live in Second Life, where she brings in her years of professional experience and a unique and expressive guitar style.

Established in 2012, End of Time has eight regions which are open to all visitors. They offer many live music shows – also dj sets – throughout the week and their open air stage has enough room for a good crowd.

Thank you Mystelle for a mesmerizing hour!