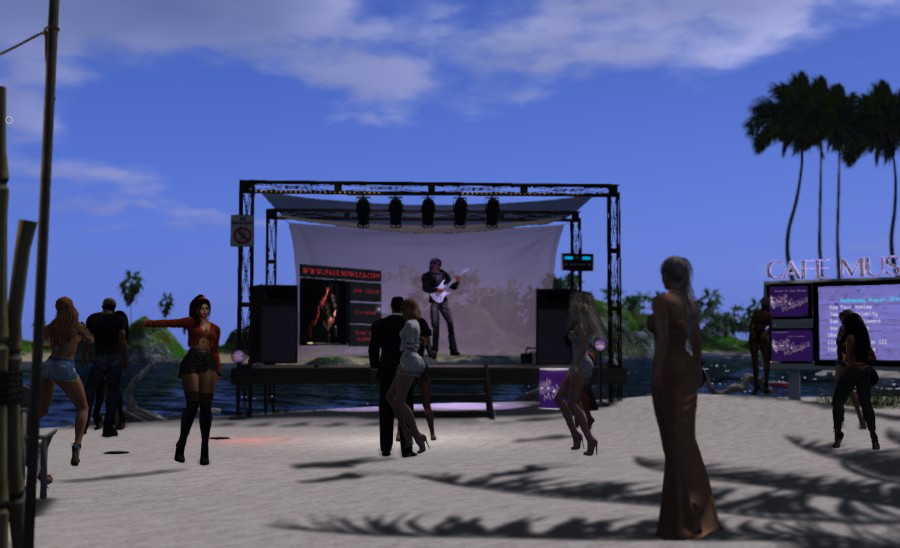 Hello wednesday, hello Cafe Musique! What can be better as to have some live music at the beach on a summersday? Not much, right. So I decided to see Paul Nowles and have a good time.

Starting right away with Bob Segers “Old time Rock’n’Roll”, Paul catches you with his slightly rough voice and shows right from the beginning what you can expect: an entertaining hour with rock and pop classics. Being the first time on one of his concerts, I wasn’t disappointed at all. Playing mostly songs from the 70s and 80s but also some more modern ones like Matt Corbys “Resolution” (2013) his choice of songs is varied and diverting. All in a good sound quality and well performed.

Coming from the heartland of the midwest and from the home of the Rock and Roll Hall of Fame (Cleveland U.S.) all the way to Second Life, Paul Nowles is a virtual entertainer, vocalist, musician and songwriter who is famous for his perfomances of classic rock and local music.

Speaking about Cafe Musique, it is an atmospheric beach club with lots of live music events all day long. So you can enjoy live music nearly every time, no matter which timezone you are living in.

Thank you Paul – rock on!