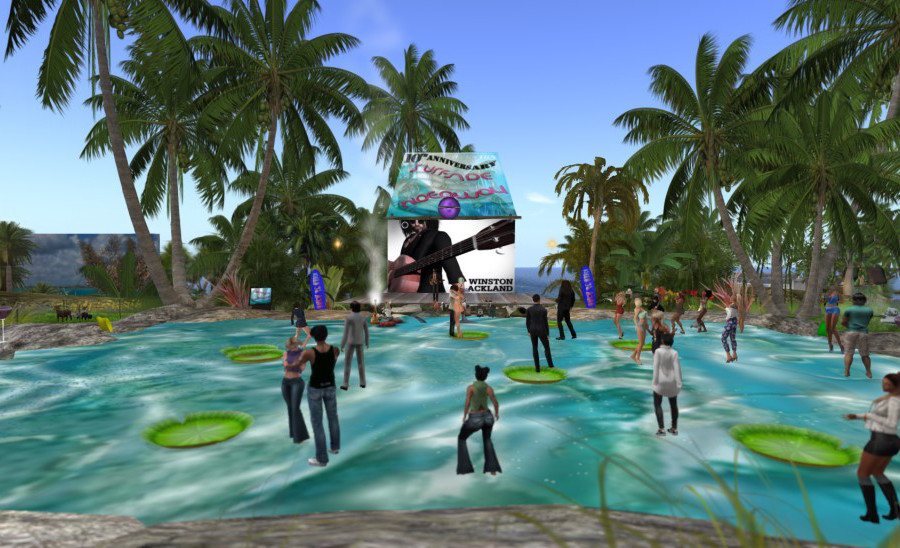 Monday evening in Second Life, started my week at Surfside Hideaway with Winston Auckland. Sun, palms and beach… summer feeling is still there.

Very catchy and easy listening, Winston started with some Willie Dixon and Scott Dunbar before he got into his own originals. His setlist was well picked as he played mostly not so common/well known songs. And as I love accoustic guitar it was easy to be dragged in and let me had a good time. Be sure to make it to one of his concerts – you won’t regret it.

A professional musician for over 20 years now, Winston merged Real Life and Second Life when his cover of “Lithium” hit the big screen in 20th Century Fox Films blockbuster hit, “Marley and Me”, and again in the summer of 2012, when Winston’s cover of “Psycho Killer” was featured in Oliver Stone’s “Savages”. As Second Life live performer he provides original works and quirky adaptations of obscure covers. Simply put, Winston Ackland is a musical party with old friends you haven’t met yet.

The Surfside Hideaway is one of the beach-themed venues and offers lots of live music throughout the week. If you plan a visit there, be aware of the shark – don’t get bitten.

Thank you Winston for a great start in the week!

“Not just a man and his guitar.”
Jack Slade
@ LouJacks (house concert)