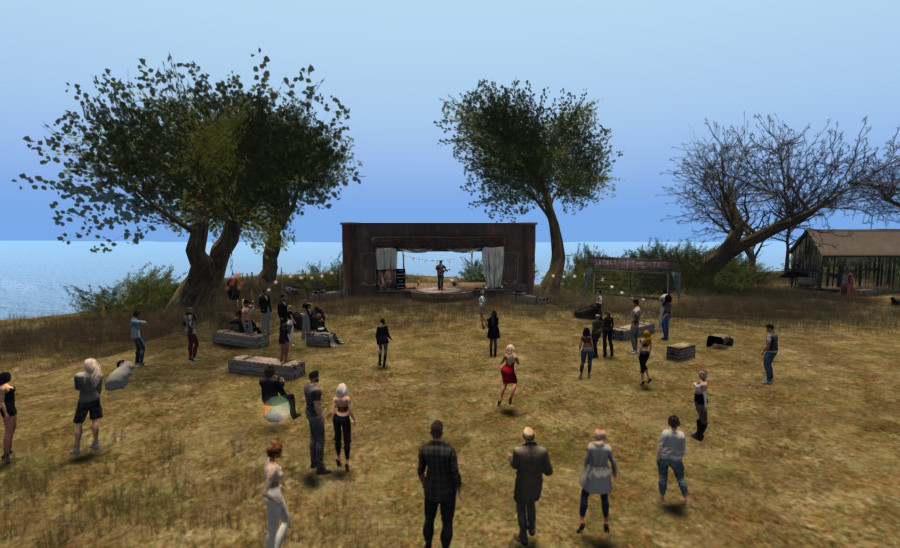 Sometimes you have to be lucky and yesterday I was very lucky. By chance I got notice of the comeback show of CQ aka Colorful Quiet who is just back from a 6 year long hiatus. It was memorable!

I could have guessed it from the crowd, this show would be special. The venue was pretty full right from the start and CQ knew how to connect to the people. Super likeable and honest, you felt this guy was happy to sing in Second Life again. His set was full acoustic and he played some Beatles, 80s & 90s classic and even had some originals amongst it. I loved his voice and the way how he interpretes the songs. My absolute highlight was his version of Joy Division’s “Love will tear us apart” – goosebump time! CQ just played and played… after his long break from Second Life it seemed as he didn’t want to stop at all, he even got into 30 minutes of overtime. A hell of a comeback!

CQ is a talented songwriter, multi-instrumentalist and producer who has been recording and performing music as The Colorful Quiet since 2006. When playing live in Second Life, CQ performs intimate acoustic sets which include his original songs and captivating covers ranging from classic folk and rock to 90’s alternative, along with some of the best indie tunes. He sometimes uses alternate tunings, will often switch out guitars depending on the mood of a particular song, and occasionally adds other instruments into the mix. He has also released several albums and had many of his original songs featured in film and television. His song “Survival” also spent 30 weeks on the iTunes Top 100 Folk Chart and was a finalist in American Songwriter Magazine’s Craft of Music Contest.

Hazardous is a very beautiful island venue, misty and a bit mysterious with a small stage for live music events which takes place regularly on saturdays. If not for the music, make sure to visit this lovely place for sightseeing or photography.

Thank you CQ for making my saturday night special!