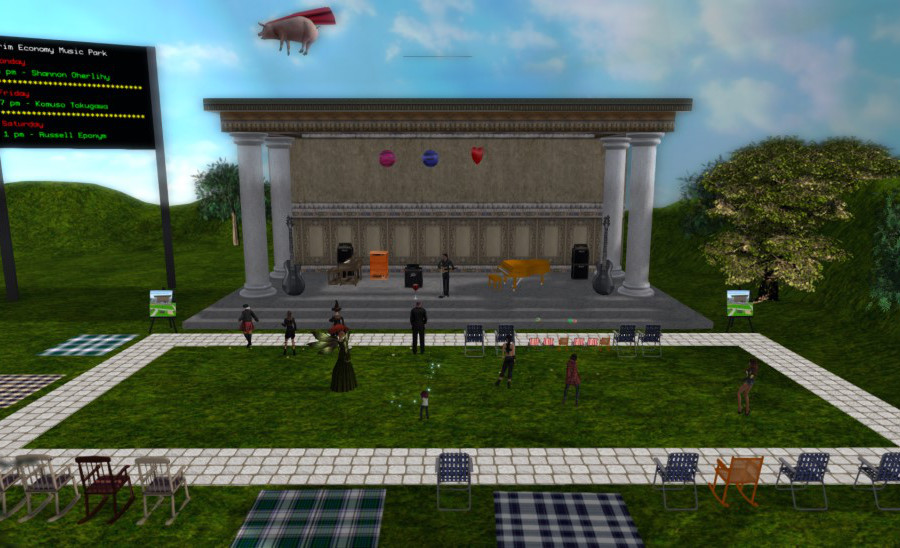 Kind of a throwback saturday for me. Nearly a year ago, Russell Eponym at Prim Economy was one of the first if not the first live concert I have seen in Second Life. And I can say he still as good as then.

As an avowed fan of folk and acoustic guitar, it wasn’t hard for me to love Russell’s music. I remember as I heard him back then how excited I was to hear an artist playing his own songs… and this excitment is still there. Even more as he invited with Ian Tunnicliffe an old companion to help him for this saturday night show. Very talkative, very likeable, he and Ian made this hour super entertaining. I loved how he took his time to tell stories and anecdotes behind the songs and of course how Ian stepped in and supported Russell. Not to mention that a successful setlist completed the show.

Russell Eponym, dubbed ‘Music Whisperer’ by his own fan club, is a British folk singer, born in England and resident in North Wales. He was one of the first live musicians in Second Life and has performed over 10.000 shows in the last 14 years. His unique sound is characterized by his meticulous finger picking style, his soft lulling voice and charming British stage presence.  Russell also plays mandolin, tenor mandola, banjo, dulcimer, Celtic harp and harmonica. As a musician, Russell’s major influences include Davy Graham, Bert Jansch, John Renbourne and Mark Knopfler. In addition to performing musical concerts, Russell has become a much sought after performer of the spoken word and has given many recitations and reading of poetry and prose.

Prim Economy is a puristic venue just for live music. It offers an open air stage and for those who don’t want to stay the whole concert some chairs in front of the stage. What else do music lovers need?

Thank you Russell and of course Ian for a wonderful folkish hour!