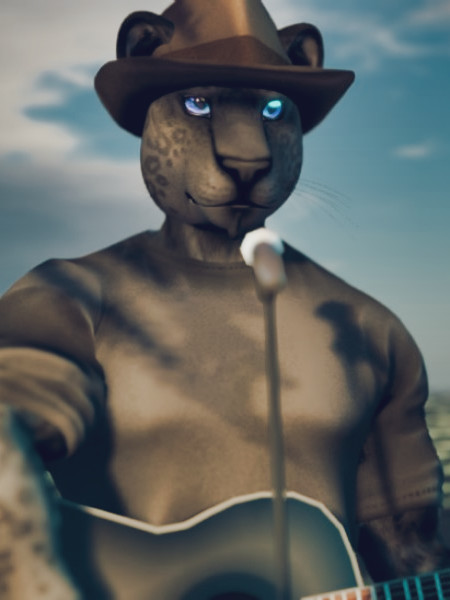 Back after a way too long break, it was Da5id Weatherwax at Cafe Musique today. Wait, Da5id? Right, that’s not a typo as he playfully regards to the Roman ‘V’ to use it in his name… and that should not be the only unusual thing.

The second thing you notice when you see Da5id on stage is that he is a bit “hairier” than the average artist – but don’t let that fool you, this cat knows folk. He started his set with an excerpt from Theodore Goodridge Roberts’ ‘The wreckers prayer’ which wonderfully leaded into his first song, the traditional “Tall ships”. Followed by another folk song he showed with Trent Reznor’s “Hurt” that he can also play other genres. In a talkative and engaging manner Da5id put little stories here and there in front of the songs and explained the origin or the tale behind them, which made his whole set more lively. This and his pleasant singing voice combined with the acoustic guitar made this lesson a very pleasant experience.

“If I make a mistake then it proves it’s all live, doesn’t it?“

Da5id Weatherwax is a musician primarily in the folk tradition with a marked preference for ballads and story songs. He’s been a semi-regular performer for over 30 years in venues on both sides of the Atlantic as varied as folk clubs, bars, church halls, street corners and subway stations, conventions, private parties and of course online streaming to virtual venues in Second Life. Although he’s familiar with several instruments he still regards his primary instrument as his voice and these days prefers to perform with a simple guitar accompaniment or occasionally a capella. He avoids pre-recorded backing tracks, taking the view that “If I make a mistake then it proves it’s all live, doesn’t it?” As Da5id has no group or website, be sure to check his calender or look out for notices in your live music groups.

Cafe Musique was established in 2015 for music lovers by music lovers. Usually hosting concerts at an atmospheric beach club, tuesdays they open their Cafe to offer live music asides of it. You can find events almost all day long, so you can enjoy live music nearly every time, no matter which timezone you are living in.

Thank you Da5id for a wistfully and folky hour!