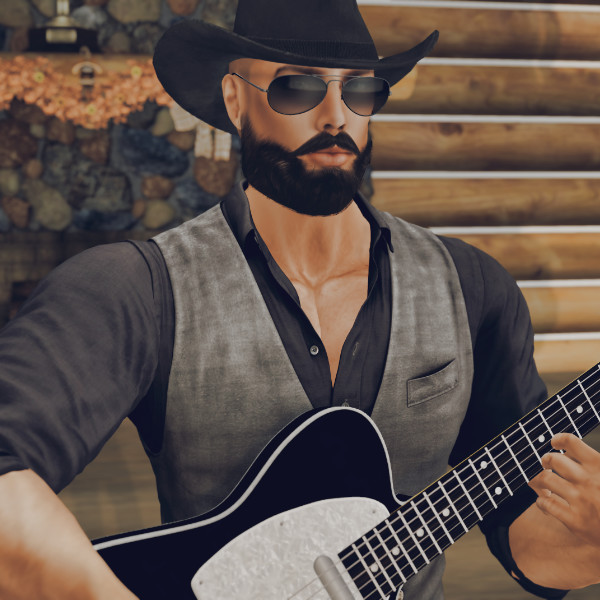 It’s been a while since my last post and as I heard about a newcomer I thought it was the perfect opportunity. No sooner said than done, I went to Saddles to see Jack Dryden.

Starting catchy with the little folk tune “Flowers in your hair” by The Lumineers he got me instantly in a feel good mood and so much in advance, he was able to keep me there. With his clear and relatively soft voice he led us through his set, which mainly consisted of country and some pop tunes – but he also took care to keep it varied and so there were not only upbeat songs but also some slower ones. I especially loved his version of Tom Odell’s “Another love”, very touching. His performance combined with his friendly appearance and down-to-earth attitude made it a very enjoyable hour. Looking forward for more.

Self-taught and without any musical training…

From Retford, England, Jack Dryden is fairly new in performing live in Second Life. Self-taught and without any musical training he sings a mixture of country, pop and oldies including Waylon Jennings, Buffalo Springfield, Kodaline and The Lumineers. Jack also writes his own songs, but does not perform them yet. Speaking of performances, he attended some open mics in RL – however he is now focusing on Second Life.

Established in 2013, Saddles Live Music Venue & Retreat is a photogenic venue with a lot of things to discover. In the country themed sim you can find stables for horse riding – yes, even rezzing your very own steed is possible – a small beach, a romantic wedding chapel, a shopping mall, an art gallery and of course live music. The shows take place at 7 days a week from 7am – 1pm.

Thank you Jack what a great set!

“Originals and covers in alternation.”
Ed in SL
@ Saddles